Swami Satchidananda opened Woodstock by sharing a prayer of peace and love, and later became known as “The Woodstock Guru.” This prayer represented “the moment when a battery of unconventional baby boomers turned eastward—and inward—in such large numbers that the process became irreversible,” as Phil Goldberg, author of American Veda explains.

Since then, the embrace of Eastern spirituality has only grown stronger, changing the way we understand and practice religion, the way we take care of our minds and bodies, and the way we contemplate our place in the cosmos. Nearly 50 years later, more people than ever meditate, chant mantras, read the sacred books of the East, and participate in the multi-billion dollar a year Yoga industry. “Of all the iconic images, the one that best captured what endures from the 1960s is the orange-robed Swami Satchidananda addressing the multitude,” That photo stands as a potent symbol of the meeting of East and West that has transformed American culture.”
—Philip Goldberg

“Swami Satchidananda wasn’t the first Yoga master to come to America but, with his opening words at Woodstock and the creation of the Integral Yoga organization, he helped modern Yoga take firm roots here, and introduced it to thousands, if not millions of people in the West.”

My Beloved Brothers and Sisters:
I am overwhelmed with joy to see the entire youth of America gathered here in the name of the fine art of music. In fact, through the music, we can work wonders. Music is a celestial sound and it is the sound that controls the whole universe, not atomic vibrations. Sound energy, sound power, is much, much greater than any other power in this world. And, one thing I would very much wish you all to remember is that with sound, we can make—and at the same time, break. Even in the war-field, to make the tender heart an animal, sound is used. Without that war band, that terrific sound, man will not become animal to kill his own brethren. So, that proves that you can break with sound, and if we care, we can make also.

On August 15, 1969, Victor Arjuna Zurbel—who, along with pop artist icon Peter Max first hosted Swami Satchidananda in New York in 1966—found himself in a chauffeured limousine, escorting Swamiji to the Woodstock Music Festival where he would deliver his historic opening address to a gathering of more than 400,000 people. This would earn him the affectionate name, “The Woodstock Guru.”

In light of the news that thousands might be descending on the festival grounds—many more than were first anticipated—Michael Lang, the main festival organizer, was starting to be concerned and began looking for someone to set a peaceful, spiritual tone.

Lang called his friend Peter Max and asked who he thought should open the Festival.

Zurbel described the scene as the limo approached the Festival area, “I was sitting in the center front seat. On my right, riding “shotgun” was the Swami. Sitting in the back, was folk singer Tim Hardin (“If I were a Carpenter”), and two of his musicians. Despite our all-access VIP status, we were up against the biggest traffic jam to ever hit New York State.”

Eventually, traffic would be backed up for twenty miles. The driver, who was on a walkie-talkie said, “Get ready, they’re sending in a helicopter.” Sure enough, a few minutes later, a helicopter landed in the pasture, and Swamiji and Zurbel, along with Tim his bandmates, were ushered aboard.

On arrival, they were greeted by Lang (photos of Woodstock arrival; seated color photo: Swami Satchidananda with Artie Kornfeld and Michael Lang) and joined the backstage group, which included Richie Havens, Ravi Shankar, Melanie, Joan Baez, Arlo Guthrie, Sweetwater and The Incredible String Band. Richie Havens went on first to get everyone into the music groove before Swamiji gave his opening address.

His opening remarks and prayer set the pace for a historic three days of peace and music that the world came to know and remember as Woodstock. The values of Woodstock—peace, love, harmony—are as important today as they were nearly 50 years ago.

Swami Satchidananda left his body in 2002, yet his spirit lives on through Integral Yoga and Yogaville, and his words of peace, love and harmony remain the legacy of the generation that lived during the summer of love and attended Woodstock.
(photo: Woodstock Museum retrospective, Bethel Woods) 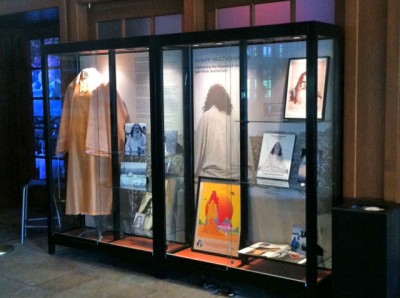